Often there is available knowledge about the structure of the system or the nature of certain components of the system. Generalized models provide a means of incorporating such knowledge into the early warning signal.

A generalized model is a dynamical systems model for the system that identifies processes at work on the system, but which does not specify functional forms for these processes. In place of functional forms, unknown ‘placeholder’ functions are included. Arguments of the placeholder functions indicate on which state variables these processes depend, as well as on which drivers.

From the generalised model, the Jacobian matrix can be symbolically calculated. Entries in the Jacobian matrix (and their changes over time) can then be determined by derivatives of observed time series, and additional system assumptions where necessary. The (changing) eigenvalues of the Jacobian matrix then constitute the early warning signal. The stability boundary for the eigenvalues depends on the nature of the original dynamical systems model (for example, zero for an ordinary differential equation model, absolute value one for a discrete time map).

We present the generalised modelling approach for a simple one-dimensional system approaching a critical transition with a single driver. (The method can, however, work for multiple state variables and multiple drivers.) Consider a population X of a species, which changes over time due to a population-dependent birth rate B(X) and a death rate D(X, μ) that depends linearly on the current population and also depends on a driver μ. A generalised model for this system is

from which an early warning signal can calculated using time series observations of X and B.

To demonstrate the early warning signal we use a simulated critical transition (panel a, solid line, left axis). From ‘observations’ of X (panel a, filled circles, left axis) and B (panel a, unfilled circles, right axis), an early warning signal was calculated (panel b) that displayed a clear trend towards the critical value (eigenvalue = 0) well in advance of the underlying bifurcation (vertical dashed line). 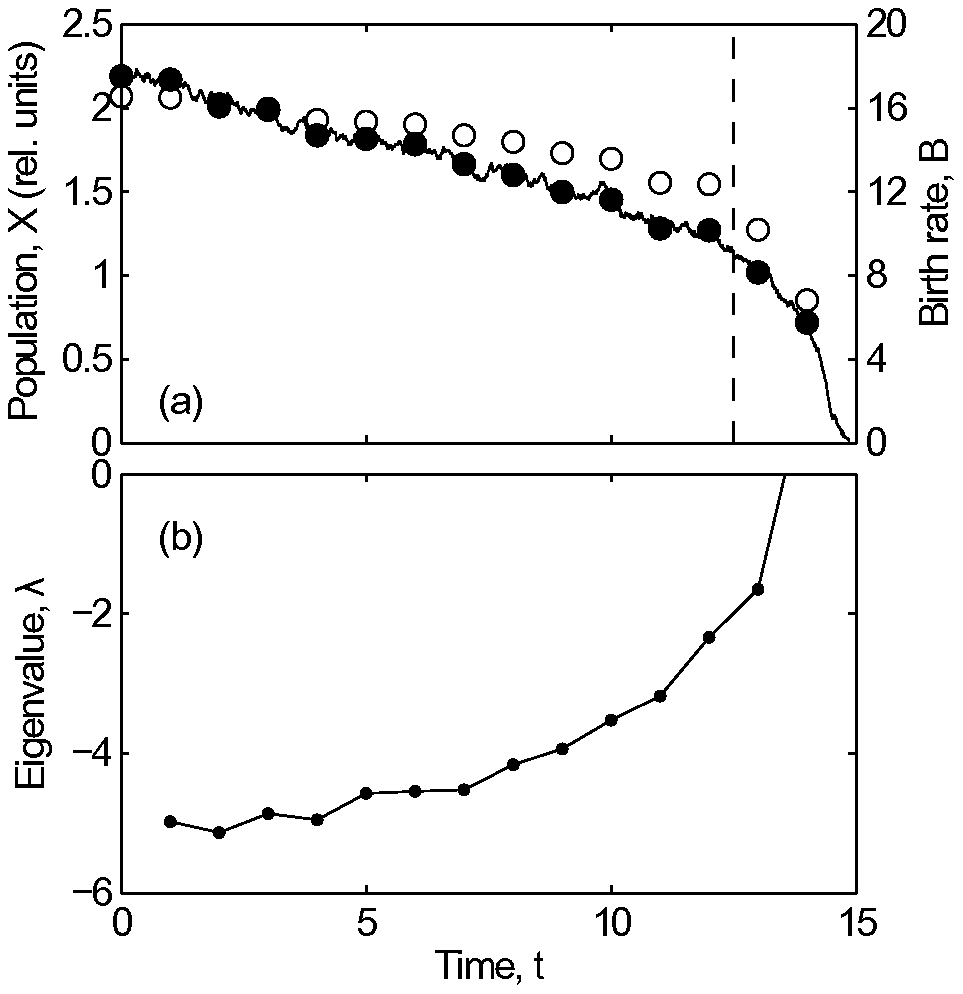